skip to main | skip to sidebar

The 29 of April? It has been a while. Apologies for the lack of posts and content. Will endeavour to up the ante in the weeks to come. Please feel free to send your thoughts, ideas, gripes, etc and we'll see if we can incorporate them.

While it's technically not the first show of the year, most agree that W.E.L.K.S in April signals the start of the new season of outdoor shows that last into the fall.  After a winter filled with debate, turmoil and gloomy headlines, it will be great to start fresh and focus on the positive, while continuing to try to eliminate the negative.
Judge Mrs Liz Cartledge awarded Best at this event, and found her winner in the Lakeland Terrier bitch owned by the Scawthorn/Averis partnership.  Her name is CH Saredon For Your Eyes Only.  Reserve went to the champion Dal bitch ''Voodoo'' owned by Mark Dunnachie.
A full listing of breed and group results can be found at the FosseData site or by clicking here
Posted by JL at 17:02 No comments: 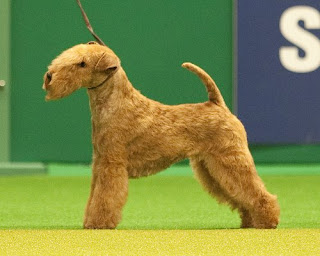 This past Saturday (April 4th) was the date for the famed National Terrier Club show held at Stafford Showgrounds.  Awarded Best in Show was the Averis/Scawthorne partnership's Lakeland bitch CH Saredon For Your Eyes Only.
Full results can be found here.
Posted by JL at 13:55 4 comments: 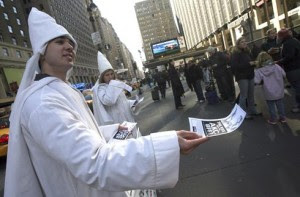 You may recall PETA's failed campaign a few months ago to persuade the USA Network to drop Westminster Kennel Club coverage in February, a la the BBC/Crufts fallout. The organization made its presence felt at the event anyway, with supporters wearing KKK costumes in protest to ''breedism'' outside New York's Madison Square Garden during the show.

Public records now released in the US have provided some shocking statistics about this so-called animal rights organization. ''PETA’s “Animal Record” report for 2008, filed with the Virginia Department of Agriculture and Consumer Services, shows that the animal rights group killed 95 percent of the dogs and cats in its care last year. During all of 2008, PETA found adoptive homes for just seven pets.''

(In 2006 the organization was responsible for a 97% euthanasia rate at its Virginia headquarters.)

The Mail Online reported on the story this week, too.
Posted by JL at 12:45 No comments:

The political drama continues in the world of the Cavalier King Charles Spaniel. It seems that at yesterday's club AGM a motion was raised to amend the Club's code of ethics to include a recommendation that all dogs used at stud be tested by MRI for syringomelia. Logical? You would have thought so. Dog World newspaper reported on the meeting:

"At first the motion was passed by 25 votes to 15, with nine abstentions. But a little while later discussion became heated when members demanded that this vote should be taken again. Some said they had not heard what was said and thus not known what they were voting for.
"Under some pressure, Mrs Jupp agreed that a vote could be taken on an amendment to remove the SM recommendations from the code. This was carried by 37 votes.
"It is understood that the treasurer’s report showed that the special general meeting held to oust Mrs Carter from the committee had cost the club £2,082. There was an additional expenditure of £1,147 which paid for the committee to be trained on how to deal with questions from the media following the SGM."

A BENCH MARK WEEKEND Before the AGM last Sunday, Simon Swift, Cardiologist, gave a talk to members to inform us of the present situation, current research and to update us on the new BVA/KC heart testing scheme that involves a number of breeds including cavaliers. His talk was attended by about 25 members, including the committee, out of a current total UK membership of 1050. At the end of his talk Simon had difficulty in leaving the room for the throng of other members waiting outside for the AGM, chatting and drinking coffee, whiling away the time until his talk was over. So much for breeders’ interest in, and concern for heart problems within the breed. The AGM then followed, attended by 63 members. The agenda contained a proposal from the committee that the Code of Ethics should include the recommended breeding guidelines for SM. These are not mandatory rules, merely recommendations, and would have been in line with Hearts and Eyes breeding guidelines, which have been in place for some years. These proposals seemed to me to be innocuous and reasonable. However, the proposal was substantially defeated by the meeting. This was a triumph by the members present over neurologists and geneticists, and of course, over the committee. It would seem that cavalier club members continue to progress, like lemmings, towards mandatory breeding regulations that will surely come, as surely as night follows day. There are many members who are still not prepared to health check their breeding stock, and of those who do, it would appear that many would not hesitate to breed from affected animals. I have tried my utmost to defend and support the breed and the club. This weekend was proof, if proof is needed, that there is no point in deluding myself, or others, that self-regulation is possible. Mrs Lesley Jupp

If there is a rational explanation for all of this chaos I would love to hear it. It was only a recommendation for goodness' sake. These people need to wise up and realize that if they don't get their house (and beloved breed) in order, they will harm themselves, their breed, and the interests of the sensible, caring breeders and exhibitors in the UK.
Posted by JL at 10:10 5 comments:

Owner Jane Elders' car was stolen outside her home near Keighley, W Yorkshire, with Deli and kennelmate Jimmy inside! Jimmy somehow managed to find his way home with only cuts and scrapes. Later the car was found nearby, with no Deli in sight.

She is microchipped, but likely without a collar. Her owners are asking everyone to pass this information along to their local vets, groomers and friends.
Posted by JL at 04:10 No comments:

Sorry for the oversight...nearly forgot to include this link to the recently-aired feature on ABC's primetime news show. Its a bit of a follow up/reaction to the PDE program with American counterparts. I've only read the script so far, but the video can be viewed at this link.
Posted by JL at 15:54 No comments: